This year’s Moderator, David Grimsted, continues his exploration of our denominational ancestors, the Puritans, and their history and their ideas about God.

Early New England is often called a theocracy, but the clergy were explicitly kept from political action. Still, religion did much to rule the day, and it was ministers who were convened about the early theological disputes.

The most disruptive case was the “Antinomian Controversy” of 1836-37. All ministers agreed that salvation was God’s gift to the chosen, but most added good works and actions were commonly evidence of that. Rev. John Cotton and his followers in Boston’s South Church began speaking against works, sometimes in words condemning many fellow clergy. At ministerial gatherings, a compromise was suggested where works and behavior were secondary, but importantly connected to the salvational experience. A bit reluctantly, Cotton and his followers agreed to this, but Anne Hutchinson, her brother-in-law, Rev. John Wheelwright, and others reneged; they were banished. Cotton accepted the compromise and retained his position as leading Calvinist preacher and theologian in England, both New and Old. 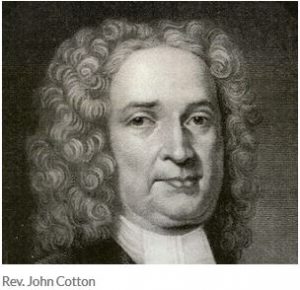 Escape to Massachusetts. Born in 1585, Cotton was 14 when he began his studies at Cambridge University. He stayed there almost twenty years studying for ever higher degrees and gaining preeminence as preacher and thinker among the Puritans. He became minister at St. Botolph’s Cathedral in 1612 and led it for almost twenty years. His bishops accepted that Cotton’s remarkable abilities and quiet manner compensated for his growing Puritan commitments. When King Charles and Archbishop Laud made clear their determination to root Puritanism from the English Church, Cotton went into hiding for a year before escaping to Massachusetts in 1633.

He was immediately made co-pastor of Boston’s South Church and his preaching quickly increased the converts there. Co-pastor Henry Wilson, at one time a victim of Cotton’s theology, made clear Cotton’s greatness at preaching and lecturing: “When he preaches from any prophet or apostle, I hear not him. I hear that prophet or apostle.”

Cotton was true to his accepted compromise, but he was never comfortable with John Winthrop’s acceptingness. When Winthrop visited Plymouth, he met fellow believers and argued that “moral” unity, not “theological,” was the goal. He was also patient with the Separatists at Salem, until Rev. Skelton died and Roger Williams proved unable to stop saying New England belonged to the Indians, not King Charles. Winthrop helped Williams to escape to Rhode Island, and remained on good terms with him, to the Puritan’s benefit.

Compromise and Intolerance. Winthrop also accepted the democratic governing tendencies of the colony in a way Cotton could not. Yet Cotton named and defended New England’s Congregational system, even after English Puritans replaced Charles and his church with top-down control Presbyterianism. Yet he always rejected the idea of toleration, even as Oliver Cromwell gingerly introduced it in England.

Cotton believed in the need to totally reform the Church of England, but his intolerance was increasingly embittering. His hate for Roger Williams was constant. One of his books was The Bloody Tenant of Persecution, Washed, and Made White in the Blood of the Lamb, but it led only to Williams’ less well-written and more convincing reply, The Bloody Tenant of Persecution, Made Still More Bloody, by the Attempt of the Rev. John Cotton to Wash. . . .  It was frustrating.

By the time Cotton died, New England was turning to the “halfway covenant,” the clearest sign that the early religious passion was turning to quiet faith comfortably integrated with people’s other social experiences. Cotton’s desire to execute Samuel Groton, wayward Puritan and hater of authority, created some shock. So did his enthusiasm for the brutally bloody whipping of Baptist Obadiah Holmes. In this 1651 incident, three Baptists were arrested in Boston, tried and heavily fined. Popular subscription raised the money to free the three, but Holmes decided to refuse money and to pay the bloody price to show effectively the viciousness of intolerance.

Cotton’s disquiet with compromise was clear when he finally accepted the banishment of Anne Hutchinson. He wrote of her “sharp apprehension” and “ready tongue,” but damned her for “the filthy sin of the communion of women,” although he had not observed any “unfaithlessness to her husband.” In 1640, he worked hard and unsuccessfully to get enough recantation from followers William Coddington and Rev. John Wheelwright to be restored to the church. Four years later, Wheelwright backed off enough to rejoin the New England clergy.

A Changing Society. Most scholars have argued that Cotton became more conservative in his old age, but it was the society that principally changed. His story in ways parallels that of the early Christians in the book of Acts. The ecstatic beliefs and hopes of these early Christians showed in their speaking in tongues and sharing all goods. But their world and their needs pressed in and they sought more permanent structures for the faith. Religion didn’t die, but it had to change.

Cotton’s great ability and position remained secure, but he increasingly felt he was living in a religious world different from what he’d hoped to create. Religious conservatives would praise the execution of four Quakers in 1662 and of some twenty “witches” thirty years later.  Yet quick reaction to the events pushed further the “Americanization” of the church in the direction Cotton had come to despise.