This year’s Moderator, David Grimsted, continues his exploration of the Puritans: their history and their ideas about God.

A student of mine, after reading Edwards’ sermon, Sinners in the Hands of an Angry God (1741), told the class, “This guy’s really good at scaring the hell out of people.” Edwards was, for a while. Yet this sermon little reflects traditional Puritan pulpit oratory, nor that of Edwards.

Given over a century after the religious settling in Boston, it uses Puritan theology to spur the new revivals sweeping the land. It was part of what would become a long practice of emotive outbreaks to challenge, complement, compete with, and sometimes quicken established churches and faiths, dedicated to practicing more comfortable, steady and sometimes stolid forms of worship. 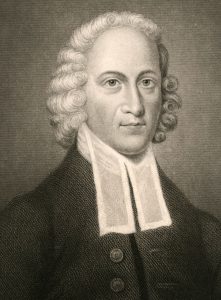 The sermon is powerfully Puritan theologically. God is just in both his fury at sinful humans and in the beauty of his saving the few capable of responding with rapture to His good as in His justice in damning all humans to death and the great majority to eternal hell. Edwards gave it in his shrewd, intense and quiet way, with little raising of voice and without gesture. He went directly from his text from Deuteronomy —“Thy foot shall slip in due time”—to put those feet on New England’s winter ground, where any self-confident stepping endangered fall, injury or even death. We all walk toward dying, and the great majority of us to hell’s tortures. Only a few feel ecstatically His glorious goodness and perfect justice in condemning most folks, religious and secular, to deserved hell forever, like “heaps of light chaff before the whirlwind.”

Slipping Toward Destruction. Edwards piles on everyday images and realities arguing how God’s power alone holds off—briefly for most— hellish catastrophe. Stormy rivers rage and waves pound—so long as God chooses to hold them off. “The bow of God’s wrath is bent always,” restrained only briefly “from being drunk with your blood.” “Hell” is mentioned 41 times, with many other references to a “fiery pit” and “eternal flames.” Christ enters only once, toward the end of the sermon, “crying with a loud voice to poor sinners.” Even in this time of revival “feasting,” most refuse to see guilt and walk on, slipping toward destruction.

Edward’s Puritan vision is darkened by absence. He says that most people in the church are destined for hell, if they fail to love passionately the “uncovenanted, unobliged forbearance of an incensed God.” Edwards rejected the “covenant” idea that allowed earlier Puritans to have faith that God’s grace fell heavily upon their community. Without the covenant, ordinary belief, however sincere, meant nothing lastingly good.

Harsh, yet Joyful. Edwards’ vision is uncomfortably harsh, but was softened by the intensity, intelligence and rapturous joy he brought to it. He wrote observantly and lovingly of the people who made their peace and hope with God. He described the joyous saintliness of five-year-old Phoebe Bartlett. Edwards lavished praise and love on David Brainerd, 29, in love with God in his few years as missionary to Indians, and in his last months when he was painfully dying of tuberculosis in Edwards’ home. As always, Edwards’ wife’s motions and emotions in her converse with God proved the revivals’ basic authenticity to him.

The American revival of these years had broad immediate and long term influence. Yet its clearest and most admired beginnings were Edwards’ work, 1733-1737. Europe, especially Scotland, admired his efforts, and became enthusiasts of revival. The era’s great revivalist, George Whitefield, big of voice and holy drama, spoke affectingly to thousands at a time in many long European and American tours. Benjamin Franklin carefully concluded that as many as 30,000 might hear Whitefield at one time, and praised what good that might do, for others. In British America in 1740, Whitefield went first to Northampton to laud Edwards in his church, with the pastor and many others in tears during his sermon. Staying in the Edwards’ home, the Anglican revivalist found it a glorious household sanctuary of holy love, sweetness and joy.

The revival attracted thousands of Americans, many ministers, and a great many of the young. In 1741Yale, hostile to its revivalist students, asked Edwards to speak. When he endorsed the young believers, an irritated Yale expelled several, including David Brainerd who had said of a tutor that “he has no more grace than a chair.” The expulsions led to Presbyterians setting up the College of New Jersey, soon to become Princeton. Dartmouth was also born of the new revivalist Indian concern. Whitefield, technically an Anglican Calvinist, had closest ties, young and old, with the Wesleys. John Wesley loved and praised Edwards’ publication on Brainerd, while his churches’ Arminianism—God offers lovingly and longingly His grace to all—made Methodism the fastest growing religion in the British colonies and later the nation’s largest.

Backlash. Revivalism always builds backlashes. By the time of Edwards’ Sinners sermon, the revival was over in Northampton. It had led to suicide, one by the minister’s uncle. It led to tiredness.

And it led to Edwards, still admired and loved, fighting back. He rescinded Stoddard’s half-way covenant and open communion. Many Congregationalist churches became hostile to his definition of Christian salvation. Rev. Charles Chauncy attacked him directly, although he still published anonymously his strongest denunciation. When Edwards refused church admission to a man who stressed his deep convictions without revivalist ecstasy, the church voted heavily to end Edwards’ pastorate. They let him continue sermons for two years in the church on Thursdays, often well-attended, but not by church members. He left in 1751 to pastor in Stockbridge and to serve as missionary to the Indians. He never learned their language, but he did end some economic exploitation of them. He wrote much, on Original Sin, True Virtue, and Freedom of the Will. Invited to a Princeton professorship in 1758, Edwards soon died there, a victim of the small pox inoculation he decided to have.

God’s Sweet World. Of all Edwards’ writings, none is more powerful than one he never published. He wrote his Personal Narrative in the early 1740s as the revival cooled. It is the story not of his life, but of his early religious experiences. He begins with his two bursts of boyhood belief, intense in their emotions, prayers and ponderings, both solitary and with groups of other lads. He rejects these because they didn’t last. He was about 16, in his junior year at Yale, when he first felt passional love for a God who enraptured him— and justly left most humans to damnation. This joyous acceptance of God’s perfect sovereignty turned life and the world for him into something ineffably “pleasant, bright and sweet.” “Sweet” was the key word in this essay, used thirty some times. For the first time in his life, Edwards enjoyed storms of thunder and lightning as beautifully sweet symbols of God’s sovereign justice.

God’s love radiated throughout God’s perfect, sweet world as Edwards walked solitarily through its fields, pastures and woods, sometimes singing and chanting his emotive thoughts, sometimes even weeping at the beauty of God’s things. He found rapture in its “grass, flowers, trees,” and in the sun, moon, stars, clouds and water—all alive with “God’s loving majesty, “ and warm with a “sweet, pleasant, charming, serene calm” that was “ravishment of the soul”:

The soul of a true Christian…appeared as a little white flower as we see in the spring of the year, low and humble on the ground, opening its bosom to receive the sun’s glory, rejoicing in a calm rapture, diffusing around a sweet fragrance, standing peacefully and lovingly in the midst of other flowers.

Edwards had periods of “distractions” as a tutor at Yale and months of a serious illness, but the intense sweetness of his vision is entwined more often in the world’s strange beauty than in hell’s dire threats. In a brief but beautiful essay, Edwards argued that it’s the earth’s enfolding sweetness that creates deep human dislike of death. Edwards revives as much as he scares.