As he completes his term as Moderator, David Grimsted concludes his exploration of the Puritans: their history and their ideas about God.

Plymouth Colony was both a part of and apart from early new England Puritanism. Its leaders were all Separatist-Congregationalists. Yet it strongly supported freedom of religion, with respect and aid for all groups and even for the “respectable” with little or no religion.

William Bradford, who led the colony for most of its first 26 years, was deeply religious, but also well-disposed to all the decent people living in Plymouth. His generous policy grew from his good experience in Holland, the variety of his settlers and backers, and the colony’s need to retain royal influence. When the Puritans came to Boston a decade later, Bradford became close and cooperative with John Winthrop. Winthrop’s strength may have owed something to Bradford’s successful earlier pragmatic “patience and prudence.” 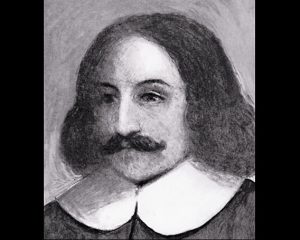 Bradford also wrote the best of Puritan histories, Of Plymouth Plantation, not personal, never mentioning himself except as “the Governor,” but making clear how his careful good sense and inclusiveness gained the colony its modest success. It also radiates the disappointment felt in the weakening of his chosen faith. Unlike other Puritan leaders, Bradford was self-educated. Born to modest farmers, he was orphaned when 7. He lived with uncles, but became a dedicated Separatist when 12. A prolonged bed-ridden illness allowed him to begin his long reading and learning career. He borrowed books from fellow believer William Brewster. This landed gentleman was to remain close friend and aide to Bradford in Leyden and Plymouth.

When James 1 came to the throne determined to make his church high Anglican, these Yorkshire Separatists decided to go to Holland, the only country extolling freedom of religion. After troubles and arrests of Bradford and others, the group got to Holland and then Leyden. Bradford was just 18. The group worshipped there happily, and they soon won Dutch respect for their industry and honesty. Yet their labor and life were hard. Brewster escaped poverty only when he began teaching English at Leyden University. An inheritance allowed Bradford to start a small weaving business. The History stresses how labor, very hard and long, injured both old and young. A few youths chose to “shake the raines off their neks” and leave the church for broader Dutch opportunities. Spain’s plans to reoccupy Holland and the church’s hopes of finding a more attractive place for new adherents led Bradford and others to accept the dangers and uncertainties of distant removal.

In his 12 years in Leyden, Bradford became self-educated. He spoke Dutch well and French passably. He learned to read scripture in Latin and Greek. He must have been well respected because he was made governor when a religious leader died shortly after arrival in America. Several Dutch and a few others joined the religious exiles. The immigrants, about 100, were equally divided between the religious and the rest. The two groups died about equally, a full half of them, in the first two months of 1621 from some harsh disease. Then only six or seven—including Brewster and military leader Myles Standish—cleaned, clothed, fed, and comforted the many afflicted, including Bradford. It was tragedy ennobling the long-coming success.

Bradford’s pious account shows some of his salty earthiness. It is easy reading, but the spelling is often strange. Phonics and context make clear that “voage” is voyage, “victilles” victuals, and “peeses” guns. There are extra l’s and e’s and few y’s. The common gives life to Bradford’s phrasing at times. He early rejects “popish trash.” His group decides to leave Leyden not out of any “newfangledness” nor ”giddie humor,” well understanding they would have to cross the threatening “broad ocean and a sea of troubles.” One conniving funder had “a smile as broad as a house floor.” In Plymouth’s first hard winter, the religious could do little beyond “powering out prairs to the Lord.”

Puritan Pragmatism. Bradford’s is a Puritan world run by God’s promises, just punishments, and puzzlingly hard choices. Bradford delights in God’s decision to have the most abusive of young sailors to the settlers be the first on the Mayflower to die and be tossed overboard. God decrees the early mass white deaths; the moral distinctions are between those who serve the stricken and those, like most seaman, who in crisis care only about their own well-being. God rules, but usually through human judgements one hopes are made to conform with His goodness. Such was the heart of Bradford’s and Puritan pragmatism.

It was God’s will that the Whites arrived in Plymouth after European diseases had decimated the Indian population. The Indians who had farmed, and bettered, the land around Plymouth were dead. The largest tribe in the area was weakened by great losses. This aided a common European feeling: America was “devoyed of all civilized inhabitants,” and full of “wild beasts and wild men…, salvage people,” all barbarous, treacherous, merciless, and fond of torturing. There was some truth in this and reason in the extreme early fears, but Bradford quickly learned the value of cooperation with the natives. Speaking a little English, Samoset came smoothing early relations and gaining return of tools Indians had stolen. Squanto came, speaking good London-learned English, and did much to guide the Whites’ early farming, fishing, trading and diplomatic efforts. Hobomak proved an able and loyal help. Bradford quickly formed a mutual support pact with Massasoit’s decimated local tribe that lasted protectively for a quarter of a century.

Bradford followed a strategy of caution and cooperation with “good” Indians, rather than that of conversion of the Boston Puritans. He observed well, noting how the Narragansetts endorsed the Pequot War, but avoided fighting in it. They let the English destroy their powerful rivals, and withdrew to Roger Williams’ protection in Rhode Island. Most were peaceful there, but slowly some saw they must act or become increasingly subordinate. Miniato determined on uprising. The Puritans rightly understood his threat, but lacked clear evidence against him, so had the friendly Mohawks capture and kill him. Bradford approved the policy. It was treachery that prevented war, likely to be deadly on all sides.

More regular were Bradford’s dealings with the often greedy English funders of the colony seeking private gain over colony welfare. Here he practiced his favorite political virtues of “patience and prudence.” He avoided directly fighting with them even when, as was often the case, they sent envoys to Plymouth to make money or to weaken the colony. He simply used his position to foil them.

In the most dramatic incident, the funders sent an Anglican minister to take over the Plymouth pulpit, long well-handled by Deacon William Brewster, effective in preaching and especially praying, but refusing to be ordained. Bradford accepted the new preacher, who professed Separatist principles. He held the pulpit for some time, though with rising doubts about his honesty. When he sent a large batch of letters to England, Bradford had them intercepted and their hostile lies about the colony copied—except for two kept to prove authorship. Then the letters were sent on, and their salacious content revealed in Plymouth. The minister denied he’d written them until faced with his script. Then he ostentatiously confessed, and returned to the pulpit briefly—until other parts of his shoddy career were made known.

Bradford always respected the promises of mutual aid between Separatists and others in the Mayflower Compact. Early a ship arrived with 28 young men, having nothing but hopes of a better life. Appalled by the colony’s poverty, they planned to go on to Virginia. Instead Bradford aided their immediate needs, and arranged for them to be taken into local families. They were good and needed workers. He early allowed some workers off from work when they pled freedom of conscience to celebrate pagan Christmas. When he saw them roistering publicly, he ordered them inside since his conscience dictated that one didn’t stop work for raucous fun. The colony originally practiced communal ownership, but it soon became clear to Bradford and others that people worked more and better under a system of equal personal ownership. When England finally granted royal title of the colony to Bradford and his heirs, the governor quickly gave the land equatibly to the settlers.

Again and again Bradford”s religiously non-judgmental strategy functioned well. Still he made moralistic judgements; all should be “industrious” and “respectable.” Perhaps his most famous action was to arrange the attack on Thomas Morton’s alcoholic Mayday celebration, destroying his settlement and sending the talented scamp back to England. Bradford strongly discarded many harsh English penal laws. In the grimmest case, religious law in Leviticus got involved. A young man accused of buggery first denied the charge and then confessed relations with “a horse, a cow, tow goats, five sheep, 2 calves and a turkey.” Forced to identify the guilty sheep, the youth was executed according to scripture, after watching the murder and mass burial of the animals.

Bradford led the colony through its hard first quarter century broken only by the five one-year terms of his friends Thomas Prince (2) and Edward Winslow (3). In his later years he taught himself Hebrew out of his love of scripture. The colony was a minor but solid success for him, but also the source of deep spiritual disappointment. The place was industrious, decent and inclusive, but was not religious before these things. When believers in his town—as they once had in Leyden—wanted to move somewhere more attractive to them and others truly religious, they reluctantly concluded that there was no place for them to go. Yet the young kept leaving, so that true religion was “like an anciente mother grown olde, and forsaken of her children (though not in their affections), yet in their presence and personall helpfullness.” Anciente and dying, she was “left to trust in God. Thus she that made many riche became herself poor.”

Touches of this lament thread Bradford’s History. He begins describing his believers as “betters” and the other settlers as “strangers.” He concludes describing the differences as between the “ancientes,” including him, and the “young,” mostly religious on Sunday but busier with other things the rest of the time. Bradford’s intelligent inclusiveness early readied Plymouth to fit well into the “young” United States.