For my fellow sports-loving Christians, this time of year can be a bit confusing. On the one hand, we have Lent, a season of reflection and repentance. On the other hand, we have March Madness, a completely bananas college basketball tournament.

March Madness gets its name from the sheer number of games played in rapid succession, but I think the madness goes a little deeper. It’s a madness of a million “If only” laments that never come to pass. A madness that, in retrospect, we might have predicted some of the outcomes, but did not. When a low seed team beats a high seed (presumably better) team, it’s called an upset. The insinuation is that unexpected outcomes are, well, upsetting.

Each Lent, we find ourselves moved by stories that we know by heart: Palm Sunday, Maundy Thursday, Good Friday, and Easter. As we follow Jesus, the Sower of Seeds, in his last days, his fate becomes increasingly obvious. Our knowledge of the outcome doesn’t make crucifixion any less upsetting, it just makes it more maddening. Our faith doesn’t make resurrection any less shocking, it just makes it more miraculous. 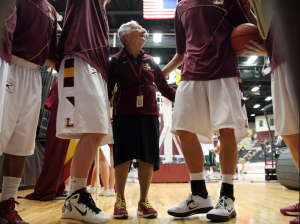 What can college basketball teach us about our mad world, and the final days of Lent? As Pastor Ellen has preached during her Lenten sermon series, there is no shame in big feelings. If you watch the tournament, you will notice college kids crying when they lose. You will witness their humanity, innocence, and disappointment, and you’ll feel it all with them, if only for a minute.

Never forget that Jesus called out to his Father on the cross “Why have you forsaken me?”, notably a nod to Psalm 22 in the Old Testament. The Bible, as it turns out, is full of upsets. Our book of ancient stories depicts people grappling with loss, maddened by their inability to predict and control outcomes. The Bible is also full of the good kinds of upsets. The underdog stories. Moments of grace, redemption, and even resurrection.

This March, lament your busted bracket. Lament the state of the world. Lament the story, still repeating, of a man who chose to speak truth to power at the cost of his own life. And then remember that the same one who called out to his Father in agony, is the same one who rose three days later. Our madness is holy, just like Mother Mary’s faith that the sun and Son would rise. As Sister Jean, the beloved 101 year old nun and Loyola basketball chaplain joked last weekend, “We don’t lose on Sundays.”

Join us for one last Praying of the Psalms this Friday, March 26, from 7:30-8 pm, as well as a Bible group discussion of the Psalms this Sunday after church. Look for links to Palm Sunday service this Sunday, March 28; Maundy Thursday Service, 7 pm April 1; Good Friday Lectio Divina, April 2, 7-9 pm; and of course, Easter Sunday April 4 at 10:30 am.

In peace and community and holy march madness,