Anne Hutchinson was one of our culture’s most remarkable women: deeply educated, intellectually acute, socially contributive, disturbingly determined. In her three years in Massachusetts Bay Colony, no one did so much to serve it and to divide it.

She came to the colony in 1634 not for religious freedom, but to practice the true faith. Her father, a minister and teacher, had educated her deeply. She and her husband had become followers of Rev. John Cotton, forced to escape Anglican persecution by moving to New England. The Hutchinson family followed him to Boston where he took over the city’s leading pulpit. Anne Hutchinson immediately assumed a central social role as midwife and herbalist, close to the colony’s women at times of greatest need and danger. She also began to lead Sunday evening religious discussions of the kind widely encouraged. Her intelligence and charisma soon drew men as well as women to her home to discuss what mattered most to Puritans: the ties between God and humans. Soon, up to eighty people arrived twice a week to ponder this issue under her guidance. Well into this practice, John Winthrop called these sessions informed and righteous. 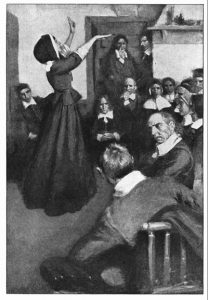 Trouble broke out when other Puritan ministers took umbrage at the position Rev. Cotton took on the relation of works to God’s grace. All agreed that humans were saved by God’s grace and not their own good personal and social behavior. John Cotton opposed any stress on works as a diminution of God’s controlling power to a degree that irritated other ministers. He equivocated on this. His loyal congregant, Anne Hutchinson, didn’t, and began attacks on other Puritan ministers. Cotton and the Puritan government asked her to disband her public meetings. She refused, saying she and most of her attendees felt God’s blessing in them.

She was called to justify her position. The hope was she would withdraw from attacking all clergy except Cotton and a brother-in-law. She insisted on her right to lead these discussions as God-given, and proved able to well bandy scripture with her opponents. But tired, badgered, pregnant with her eleventh child, Hutchinson announced that God had told her directly of His support for her doctrine and deeds, and that God would destroy the community if it censured her. Puritans believed no one received such direct personal instructions from God. Even Cotton thought there could be no defense of such arrogance.

She was put under house arrest, while her loving husband went off to build a new home for the family in Rhode Island. When it was readied, she was let go there. Sixty people left with her, but this congregation steadily declined. She moved to Long Island with a small, mostly family, group, all of whom (save a nine-year-old daughter) were killed in an Indian attack.

She was a remarkable woman. For some, she has become a feminist hero. Others praise her, as does her statue in the Massachusetts state house, as a defender of “civil liberty and religious freedom.” People find in history, as in life, what they want.

I think she would say, “I suffered for others’ fear of the truth God gave me.” Warmly brilliant, Hutchinson suffered for uncompromising commitment to her sense that what God had told her was unquestioningly true. Most Puritans felt that human personal vision meant, at best, some likely distortion.

Online Worship Service
March 15, 10:30 am
We’ll be gathering via Zoom Video Conferencing. To participate:
Tips and Hints for using Zoom:
When you join, you should be able to see and hear Pastor Ellen (and no one else).  Thus, if you have a Joy/Concern, please send it to pastor@cpcchurch.org in advance. As we move forward, we will try to bring in more voices!