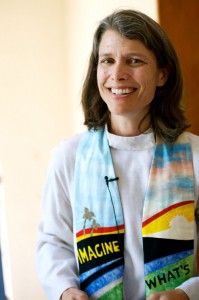 Rev. Ellen Jennings was called to serve as Pastor of Cleveland Park Congregational United Church of Christ on April 3, 2011.

Pastor Ellen received her Master of Divinity degree from Harvard Divinity School in 1991 and was ordained a UCC minister in 2007.

Ellen grew up in the Episcopal Church and has served in a variety of ecumenical settings. She feels called to the United Church of Christ because in this denomination she finds both a breadth of intellectual and spiritual openness and a depth of ritual practice and tradition.

Prior to her call by Cleveland Park Church, Ellen spent three years serving a Unitarian Universalist Congregation as Associate Minister. While there, she led multi-generational worship services, provided pastoral counseling, and created lifespan religious education programming for children, youth and adults. From 2001-08 Ellen served the Interfaith Families Project (IFFP), an independent community of Christian and Jewish families, as Director of Religious Education. During her tenure there, she developed IFFP’s preschool through 8th grade Sunday School program and wrote much of its interfaith curriculum.

Ellen has also spent many years working on environmental and social justice issues, first as a consultant for the International Consultancy on Religion, Education and Culture and then as an Organizer and Educator at Bread for the World. In addition, she has been an active lay leader of both First Congregational Church in Berkeley, CA, and Christ Congregational Church in Silver Spring, MD, thus developing a great appreciation for the importance of lay ministry and leadership.

Pastor Ellen is a strong advocate for special education and has founded and facilitated support groups for parents, lobbied for policy change, and organized numerous workshops and trainings for families of children with special needs. Ellen has three boys of her own—Nicholas, Teddy and Tate—and is married to Mark Corrales. Her dog, Samwise, is a constant companion and reminds her that daily walks in the woods are a wonderful way for all creatures to stay centered and connected.